Thanks to our partner Toyota New Belgrade MAG Centar d.o.o, we are able to introduce you a new vehicle that will soon be offered to Easyrent Rent a Car Belgrade.

Considering that we are probably the only Car Rental in the region that has hybrid cars in our offer, we take the opportunity to present them to you, so you can get a picture of what kind of vehicles are in offer before you book them. 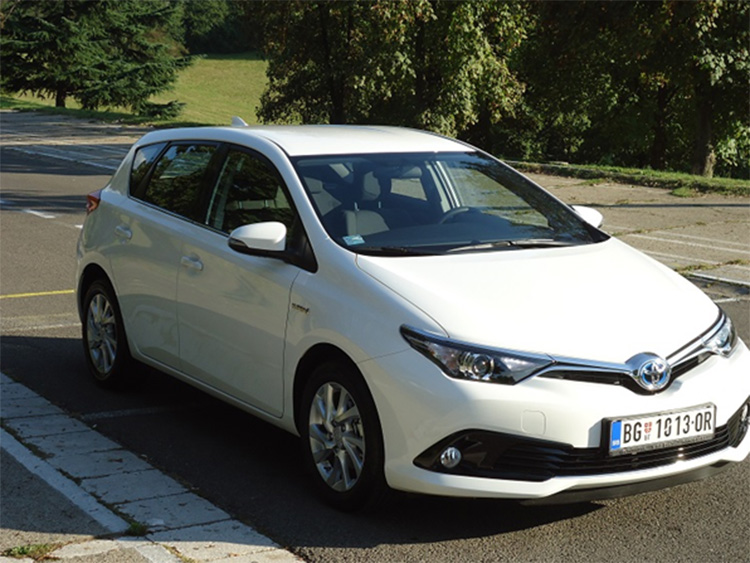 Toyota Auris Hybrid ... so we can freely say that it is quite different from the "ordinary" Auris, although they look exactly identical, the differences are only sensible when driving.

In fact, this combination is the only available in the Hybrid version of Auris, which you can choose between 4 packages of equipment. 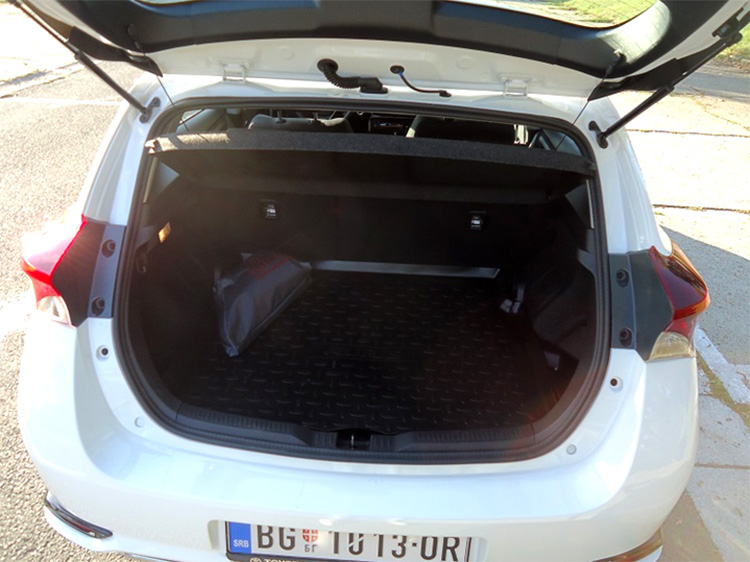 Let's go back to motorization. The combined power of the Auris Hybrid is 136 hp, which is quite enough for a decent performance (the factory data indicate that the acceleration from 0 to 100 km / h is 10.9 seconds - we have not tried it yet, but there is no reason not to trust the factory). 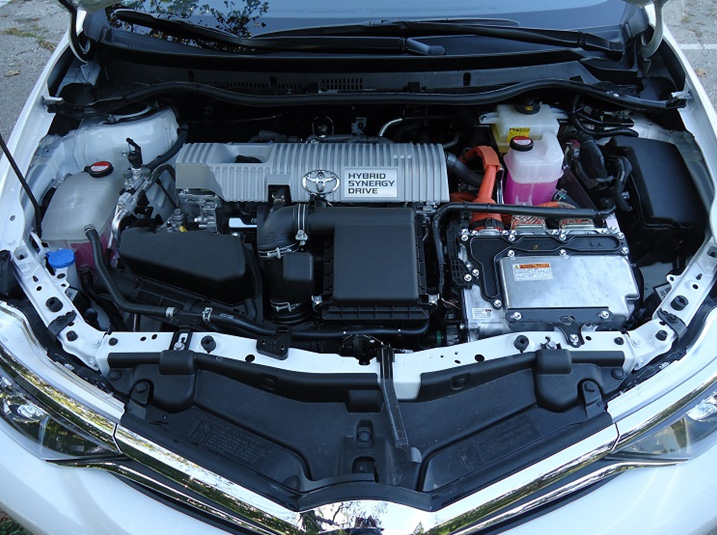 The car starts by pressing the Start / Stop button, after which it will signal that the car is active only the flashing lights on the instrument panel and the beep signal.

The gasoline engine does not have any function when starting a car -in the cabin space  its complete silence.

The gearbox lever differs from the lever in Yaris Hybrid, and it takes a bit of time to get used to it, as it does not look and is not used as a classic automatic transmission lever. 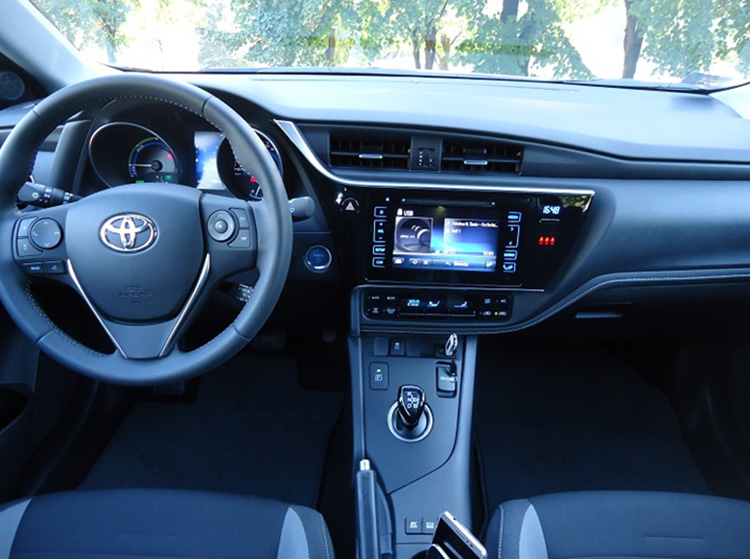 By switching to drive mode, you are ready to drive.

The car is completely silent, until the moment of sudden acceleration , or if you constantly drive to the electric drive and the battery simply drains. Then the petrol engine takes over the drive function, but it also charge the battery, so that the driving  itself, is essentially a combination of the electric I petrol engine .

The performance of the Auris Hybrid is really good, we can not say it is excellent, as this is simply not a sport car, although it gives a little impression.

Since we have “normal” Auris with a 1.6 petrol engine and 132 hp in our fleet, our filing is that "normal" Auris has a better performance.

The Toyota Auris Hybrid still has 100 kilos more than its normal sibling, so the driver feel that difference.

In any case, the Auris Hybrid is really nice and easy to drive, the acceleration is quite good, as well as between acceleration when overtaking .

We did not test the maximum speed, but the Auris Hybrid rises to 180 km / h without any problems

Thanks to the operation of both engines, power loss is not felt at all, during acceleration, since the combined torque is higher than for ordinary Auris.

The suspension on Hybrid is "slightly different", so Hybrid seems to have no stability in the curves and sudden changes in direction as "ordinary" Auris.

Do not misunderstand us, the vehicle's suspension  is phenomenal, but it's not as phenomenal as the ordinary Auris that is simply glued to asphalt. 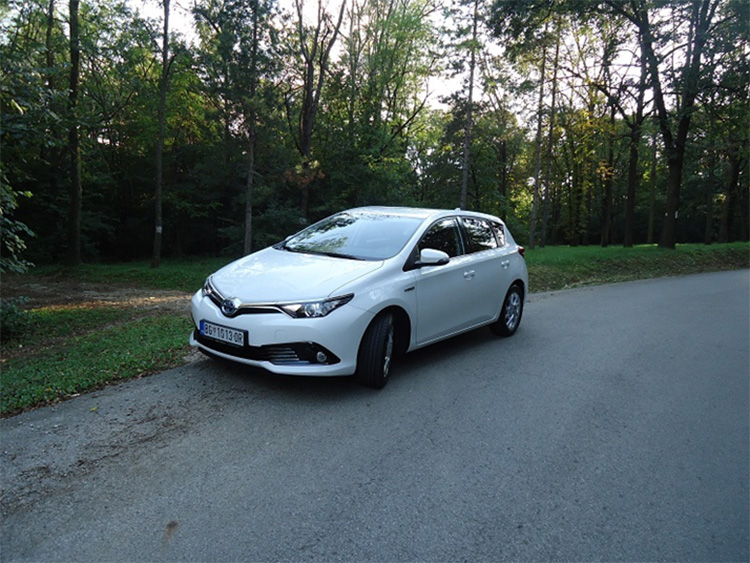 Auris interior is perfectly designed and you have the impression that you are sitting in a premium brand, since the materials are really great, as well as finishing. 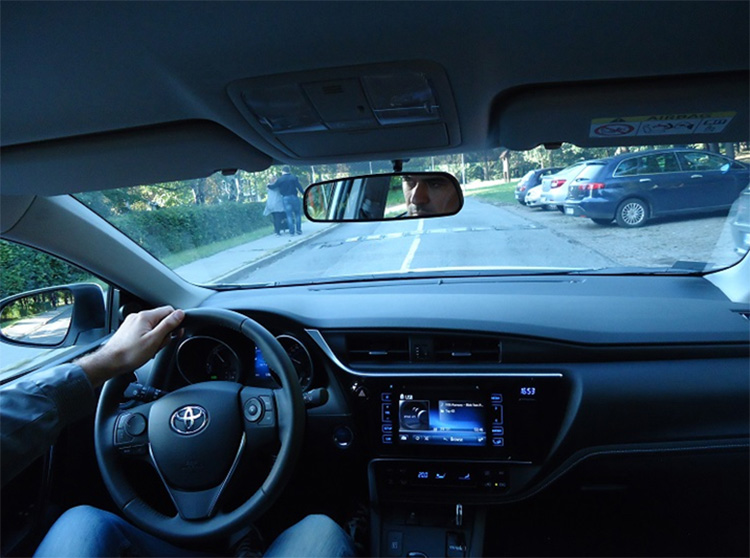 Audio system and air conditioning are excellent, everything is digitally and nicely profiled.
What makes this car different from its colleague and what its essence is is the Co2 emissions of just 82 g / km, as well as a consumption that is about 4.7 l of unleaded gasoline on average. 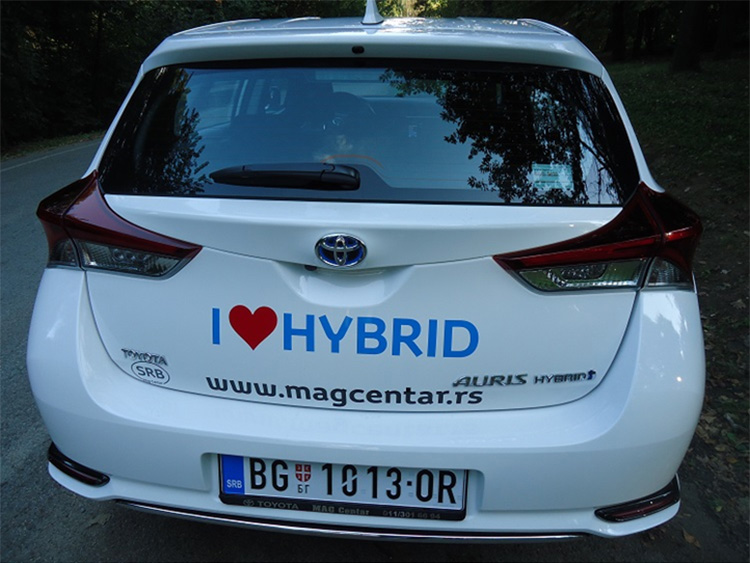 To summarize, what we have recorded is more than excellent, given the size, weight and performance of the car.

The Toyota Auris Hybrid is a truly high quality and good car, which has its full potential in the conditions of city rush.
The price of the vehicle is not small and it is always the question of purchasing such a car, since you can get a bigger and more comfortable car for similar money, but you can not afford to get a car with less Co2 emissions and less fuel consumption.

We think that slowly, the time of Hybrid vehicles is coming, and that in accordance with world trends, here too, certain subsidies will accompany the ownership of such cars.
Toyota Auris Hybrid will be available in Easyrent Rent a Car Belgrade through an operating rent, or long-term rent for Legal entities .

For more information on rental terms and prices and available models, please feel free to contact us.

Your Easyrent Rent a Car Belgrad